Home Money How Much Is 100 Gifted Subs On Twitch? Getting More Twitch Subs 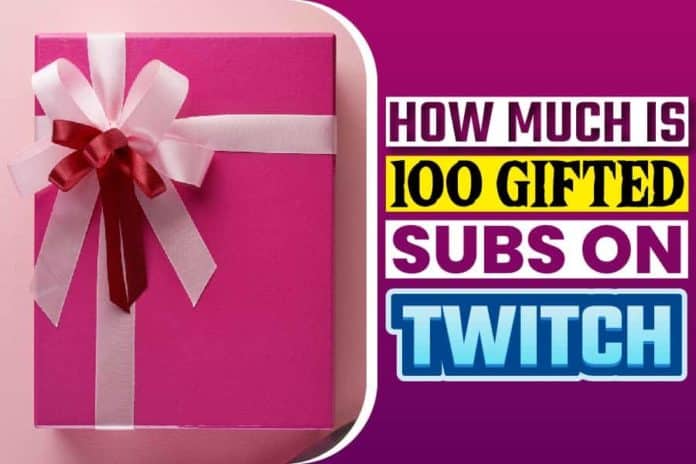 Gaming has taken over the community as we know it, and online gaming has become a norm for most people. Twitch is a fantastic platform that allows gamers to share their plays with other people to make a better experience and a chance to make some money.

Having many subscribers has many benefits on all social media platforms, including twitch, so it is common for people to buy subs. You might have wanted to buy some, but you don’t know how much it will cost, so let’s get into it;

How Much Is 100 Gifted Subs on Twitch?

To get 100 tier 1 subscriptions on twitch, you will pay 499 dollars. Tier 2 subscribers will cost $999, and you will have to pay some additional taxes for each group.

Getting subs of a higher tier might be a bit expensive, but they will offer more perks, and you stand to make more money. The more subs you have, the more subscriptions you get each month; thus, you will have more funds to expand your channel.

As video games have become more popular over the last decade, live streaming has stepped up to improve gaming, making a mark in online entertainment. Online game streaming made revenue of up to 140 billion in 2018.

Twitch is the most famous online gaming platform, and it has been at the forefront of live streaming for games since its launch in 2011. But what is twitch, and how did it become such a big deal in the online gaming community?

Twitch is a website that allows gamers to stream themselves and their gameplay to show people what they are doing live.

Viewers can support the streamer by tipping them or subscribing to their videos for a small monthly fee.

While twitch mostly focuses on gaming, the platform has evolved, and now you can view live streams of people cooking, playing poker, or walking around cities. Twitch is different from YouTube and other platforms since it is real.

There are no edits, and what you see is happening live, and the viewers can chat with the gamer and each other in real-time.

Twitch started in 2007 as Justin.TV, a site for live casting, but it didn’t catch on until webcam prices dropped.

After its renaming in 2011, twitch had over 20 million monthly visitors, and in 2014, the site blew up thanks to a Pokémon video that went viral. Later on, in 2014, Amazon acquired twitch for 970 million dollars.

Their financial backing and success allow streamers to earn a full-time income by gaming on twitch.

They do this through sponsors, donations, and subscribers in platform currency that the streamer can withdraw and use.

Twitch is a platform that brings together millions of people to create their entertainment and connectivity.

As users get access to more games and faster internet all over the globe, twitch is sure to grow even more in the coming decade.

How Do Twitch Streamers Make Money?

Wouldn’t it be nice to stay at home and play video games all day and get paid for it? Many people have had this thought since many popular gamers are making six-figure incomes and more just for playing games.

You will not make any money for a beginner with twitch until you get 50 followers; once you get to 50, you will become a twitch affiliate.

Twitch runs ads against your stream; once you make an affiliate, you will start getting a share of the money they make on ads.

The money you make off ads is not much, but making affiliate gives you more monetization options, with the most significant one being subscriptions. On twitch, streams are free to view, but some fans could subscribe and pay for the streams.

Subscribing will support the streamer financially, and it will give the subscriber perks like unique emojis, badges, and the ability to watch streams without ads.

Twitch subscriptions cost between 5 and 25 dollars each month, depending on the subscriber’s generosity.

This money is shared equally between twitch and the streamer; the more subscribers you have, the more money you will make on twitch. Another way to make money is through bits.

Viewers can purchase bits, animated emojis that appear in the chat room while you stream and fans can use them for cheering.

A fan has to pay to use a bit; therefore, each time they cheer, the streamer gets a cut of the money they spend on the bits.

Viewers could also choose to donate their contributions directly to you without subscribing. This is better than subs since there won’t be revenue share with twitch, but there is no auto-renewal, so it might be somewhat unpredictable.

Affiliate programs are another popular source of income for most people. Most twitch viewers are hardcore gamers, and they are always looking for gaming products. This is why most twitch users have links for the products they use and games they play.

Every time a viewer clicks on an ad and makes a purchase, the streamer will get a percentage of the sale from the vendor, be it Amazon or any other online retailer. If you have a small fan base, you will not make as much money as you want.

However, when your stream grows more popular and you get a couple of hundred viewers or subscribers, you can apply to become a twitch partner.

Once you make a partner, twitch will give you all the monetization features in addition to more exposure.

Twitch will recommend your stream to viewers, and it will put your content in front of more people.

You will make more money since you will get more views, subscriptions, and donations. You might get offers for sponsorships that you could put on your stream.

You will get paid for these sponsorships, and you might be paid to go to gaming conventions and events like that.

The road to becoming a streamer of this caliber can be long and hard since the competition is stiff, even for talented gamers.

Most professional streamers make between $3000 and $5000 per month playing video games which makes it worth doing full time.

Successful streamers can use their popularity to land deals with outside sponsors and sell merchandise to make even more money.

How To Get More Twitch Subscriptions

You might get frustrated when you start the twitch account since you won’t get that many followers.

Most viewers go looking for popular streamers, and you might have a hard time as a beginner, so here are helpful tips to make it easier for you to get subs;

1. Provide a value that is not provided by other streamers

You could do many things on the topic, provided users will like it, and it is rare. One of the biggest of these is being educational and teaching your viewers.

If you have unconventional tips that help you play better, you could share them, and your views will appreciate it. Show new skills or any new value you can add to the platform and figure out how to monetize it towards your stream.

Dig deep and figure out what value you can provide to the platform, and once you showcase it, you will notice that more people move to support your account.

2. Be Pleasant and connect with your viewers

When you can make someone laugh, you change their mood when they come to your platform, making them regulars. People want to have fun on twitch, and giving them fun will make them stay.

Make it your personal goal to ensure each viewer laughs and their mood changes before you log out. This will make viewers connect with you, and they will be more willing to subscribe, make donations and contribute to more of your content.

Please don’t make the game sorely about you and the channel; make it about your viewers as well. Try to be kind to the viewers and engage them in the game to know their views matter to you.

Engaging the viewers will increase player enjoyment, and you will get more subscriptions from it. If you can engage your players, you should see new members come to your site with each stream, and they will not leave.

Nothing great takes a day to build, so you need to be patient with the views and give your channel time to grow at a steady natural pace.

Having many hardcore fans will make your channel more stable and give you better deals and opportunities.

You could get 100 subs for as low as $499 on twitch, and the benefits of these subs will outweigh the money by far.

Growing the number of subs on your streams will help make you a lot of money that you can use to buy more games, infrastructure and support your lifestyle.

As a beginner, you might have problems getting followers on your videos, but you should get them with a bit of skill and patience.

Engage your audience and keep them entertained through the stream, so they come back for more.

Emaar Beachfront Among The Areas With The Highest ROI And Two New Residential Complexes...

What Is A Blockchain Development Company?

What Happens If You Cash A Fake Check At Walmart? A Detailed Answer

How To Add Chase Card To Digital Wallet Without Card