Home Money Where Does Bail Money Go? See What Happens To Your Bail Cash 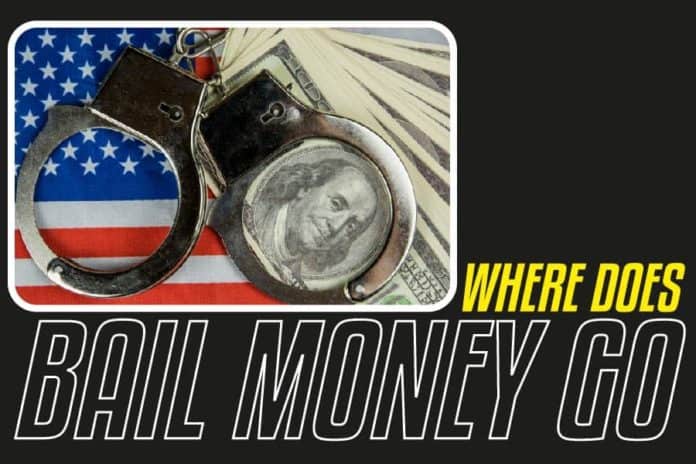 Trying to get someone out of prison can be stressful sometimes. Depending on the crime committed, meeting the condition for bail might be difficult.

Bail can be in diverse forms. It can be a bond, cash, or property. It all depends on the option set by the judge.

However, people are left in the dark about how the court handles bail money. Where do all the millions paid for bail annually go? Keep reading to learn more.

Where Does Bail Money Go?

If you’re arrested for a crime, you can request bail from prison. The judge may decide to grant or deny your request. But keep in mind that bail doesn’t mean you’re a free man.

If your case is still active in court, the court will hold on tight to your bail money. Why? They want you to appear in court to face trial for the crime committed.

If you fail to show up in court any day, you can forget about your bail money. The court may even issue a warrant for your arrest for not showing up when you have a court hearing.

Now, what happens to your bail money? The court will distribute it across the city and county. In other words, you’ll lose your money.

If you didn’t miss a court sitting and were found guilty or not, the court will return the money to the individual that paid it. They’ll only consider sending the money back to the person that posted it to them.

A Handy Tip: If you hired a bondsman or bond dealer to help post your bail, know that a certain percentage of the bail money (usually 10%) belongs to them.

Keep reading as we discuss more on bail money.

No one would wish to get into trouble with the police, but things happen unexpectedly. You might be in the right place at the wrong time.

Someone might have committed a crime and fled the scene. But the police may come around and arrest another person present at the scene for the same crime. And whether you claim to be innocent of the crime or not, you can only go scot-free temporarily when a court accepts your bail request.

The normal way to get out of jail when arrested is to post bail. And you have to pay the bail condition in full before you can be allowed to leave prison.

So, what’s bail? It refers to the cash, property, or bond offered to a court in return for one’s freedom.

Meeting your bail condition doesn’t mean you have been discharged and acquitted. It only means you have given the court your word that you’ll return to face trial on the set date.

If you fail to show up in court, you won’t get back your bail money. The court may also issue a warrant for your arrest.

A defendant’s bail money posted to the court is returned when the case ends. That’s how the court operates. The court grants defendants’ bail requests to ensure they return for trial at the set date.

However, if a defendant fails to appear in court, they will automatically forfeit the bail money. Judges don’t treat such issues lightly. Thus, they may issue a warrant of arrest.

A Handy Tip: If a defendant commits a crime and gets arrested while out on bail, there would be no refund of the previous bail money.

Who Is Responsible For Keeping A Defendant’s Bail Money?

A ton of work takes place behind the scene once bail money is paid to the court. But the question is this. Who holds the bail money? Is it the judge or the court, in particular?

The court is always aware when a defendant meets a bail condition. But it’s not the judge or court itself that holds the bail money. The sheriff assigned to the case holds the money, pending the final judgment on the case.

But please, take note of this. Whether you’re found guilty or not guilty, you’ll have your bail money returned to you. The only way you won’t get your money back is when you miss a court sitting. You could even land in big trouble by doing so.

Who Is Qualified To Pay Bail Money?

Someone in jail can pay bail themselves. Just arrange to get the bail money paid and walk out of prison. But if you can’t, don’t fret. You can always contact your family, friends, or colleagues to help you out.

What’s the best solution to meet a bail condition if you don’t have money? You can contact a bail bond agent or bond dealer for help.

Bond dealers are professionals who help pay bail money once a defendant has agreed to their terms and signed the contract.

However, bail bond dealers charge a fee. They set a certain percentage of the full bail money. Furthermore, contracting a bond dealer to pay your bail doesn’t mean you should be careless.

You have to honor the agreement in the contract signed. In other words, you must show up in court on due dates and be ready to pay back the bail money, including the percentage.

A Handy Tip: It is unwise for a defendant to abscond with a bail bond dealer’s money. They’ll get you no matter where you run to, and you’ll likely face a tougher legal battle.

Bail Payment Options You Should Know

Here are the following forms bail can take. In other words, a defendant’s bail can be in any of these options.

How Bail Amount Is Determined

Usually, it’s the judge’s responsibility to determine or set the bail amount. It’s not the duty of the police.

The judge has the power to grant or deny a defendant bail if the crime committed was severe. Another reason a defendant may be denied bail is when they are deemed a threat to the community or other people if released from jail.

Below are other ways judges set the bail amount.

#3: Record of showing up in court.

#4: Poses a threat to the victim, their family, or others.

#5: The defendant has other pending cases or charges.

Defendants that boast a history of not showing up in court during their trial or have previously ran away after bail payment may receive a higher bail amount.

Therefore, judges feel individuals accused of committing a felony have higher flight risk. They stand a chance of spending many years in prison once convicted. Thus, they may run away once bailed.

Where does bail money go? Hundreds of people bail themselves from jail now and then. But it seems how the money is being handled is a mystery.

Well, there’s nothing mysterious about where bail money goes. Defendants get their money back if they show up in court when needed. It does not matter if they are convicted of the crime or not.

Failure to show up in court can land a defendant released from jail on bail in big trouble. The judge might issue an arrest warrant for the person. The individual will also forfeit the bail money.

What To Evaluate Before Ordering Medical Supplies Online

Our Dirty Love For Oil: Profit Comes Before Human Rights