Home Money Does The NRA Receive Federal Funding? Let’s Dig Into It! 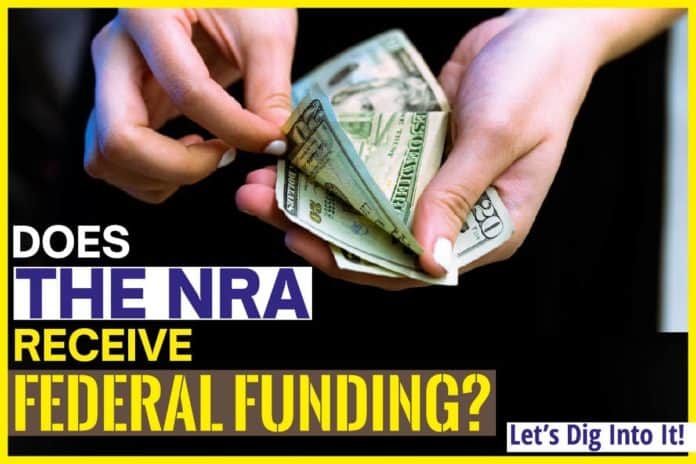 Every association and organization needs a specific amount of money to operate on its cause and motto. Without that cash flow, the organization ceases to even exist. Similarly, NRA has their own sources of funds on which they carry out their duties.

But does the NRA receive federal funding?

The answer depends on how we perceive federal funding. For instance, it receives money from the Department of Homeland Security, USDA, Fish and Wildlife Services in the form of petty transactions. However, the actual funding comes from memberships as it is a club structure.

Brief History Of The NRA

The first thing that comes to our mind when we read ‘gun rights association’ is the NRA. This is because they have been working in the field since 1871. Ever since they were founded in New York, the NRA has come forward as the ruling body of all sorts of firearm sports.

This association follows a club-like structure where members pay a certain fee to register and renew their membership. And, of course, we are all familiar with what the membership list looks like. It’s no joke that the untold prerequisite of membership is owning and knowing how to fire a firearm.

NRA is widely known as the notorious opponent of gun control laws. They claim that they do not target a certain demographic. However, the membership panel includes all sorts of people such as law enforcement officers, businessmen, gun enthusiasts, etc.

Does The NRA Receive Federal Funding?

If you’re wondering where NRA gets their funding from, then you’ve landed in the right place. In this section, we’ll be clarifying how NRA receives the funds it operates on. We solemnly hope to have all your questions answered by the end of this read.

Here’s the most straightforward way to put it – No, the NRA doesn’t receive official funding from the Government. There isn’t a sector for such sort of funding in the first place. Therefore, the Government doesn’t involve itself in it. At least not directly.

We understand why these inquiries arise in people’s minds in the first place. A lot of it has to do with NRA’s notoriety as the strict opposition of firearm control laws. So people are naturally curious to understand whether the state is lenient on funding the NRA in its initiatives or not.

Now, all transactions that NRA makes with the Government are in the form of purchases and sales. By purchase, we are referring to the facilities and amenities that they purchase from the state. And sales refer to the services they offer to the Government apart from gun security and awareness programs.

Where Does The NRA Get Funds For Its Expenditure?

Let us break down the cash flow to you in a very simple manner – Clubs earn a significant amount of royalty from their membership fees, and NRA is just one humungous club. With members all over the world, the NRA receives countless unrecorded donations that surpass several million in total!

It’s noteworthy that donations and memberships aren’t their only source of income. A lot of their revenue comes from training modules, safety programs, and training for safe and responsible gun use.

They impart these educational services among both members and civilian participants alike. Some are even exclusive to armed forces officers only. Both safety and combat-based training are included in these programs. And this is what makes these lessons more expensive than average.

Other forms of donations and supports come from the allied groups of the NRA. These small groups share common goals as them but are not as powerful. Note that it’s very hard to determine how much revenue the members provide. This is because we do not know how many of the members are ‘paying members.’

The NRA claims that most of their funding comes from members with firearm ownership. However, they haven’t provided much information to back up that opinion, which has led to several controversies in recent times.

1. Why does the NRA discourage the Smart Gun?

The NRA isn’t a big fan of smart guns because once it hits the market, non-gun persons will start to enter the business with their own patents. Although this gun is safer, it voids several functionalities and doesn’t serve the firearm regulation properly. More importantly, it’s a potential legislative threat to actual guns.

2. When and Why did the NRA file for bankruptcy?

NRA filed for bankruptcy at the beginning of 2021. The organization seeks to resort to the Chapter 11 claim of bankruptcy as means to evade the political arrangement of New York. They did so after various allegations of fraud and abuse came their way.

3. How much does the NRA spend?

According to BBC, the organization’s annual income is nearly $250 million annually. They also record a total expenditure of more than $2.8 million to influence gun control policies.

4. Why is the NRA so controversial?

The NRA has been deemed controversial because of its strong opinions on how more guns mean more security for the country. They vehemently claim that the open carry of guns in most public places should be normal. Moreover, much of their fame comes from the strong opposition to gun control laws.

Know The 3R References To Funding Only!

The 3 Rs refer to real, right, and relevant sources of funding. We urge our readers to verify every piece of information before they consider believing it. This is why we have tried our best to compile all the authentic information before you. Stay safe and use your firearms responsibly.

The Internet is a rabbit hole of information. So not everything you read on it is necessarily true. Many articles on the Internet gather traffic by whipping up controversial opinions on the NRA. Now it is up to you to decipher the real message on whether do the NRA receive federal funding or not.

Advantages And Disadvantages Of Renting An Apartment As A Student

The Simple Trick To Sell A Dying Product Cheaply

How To Safely Buy Cryptocurrencies