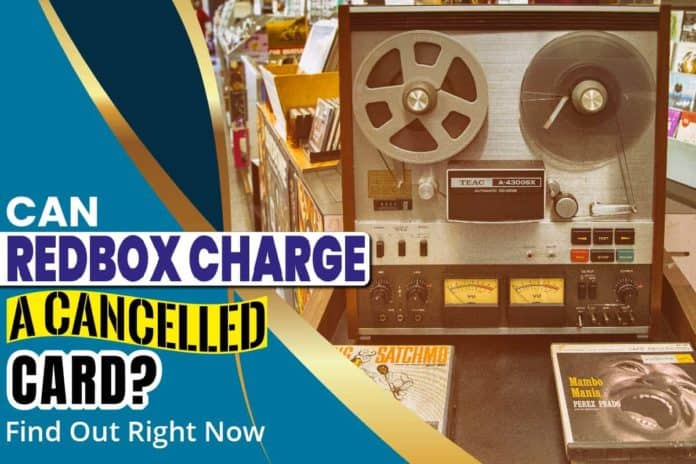 Redbox has made monotonous daily life exciting with different entertaining content to watch right at the tip of your finger.

But a question most Redbox users face is the problem related to charging with canceled cards. So, if you’re wondering, “can Redbox charge a cancelled card?” then we’re here to help you out.

Redbox will never charge a canceled card, and any attempt to charge your card after it has been called off will ultimately fail. So, you can be assured of this matter since many subscription companies may charge an account after it gets canceled.

But that is not the issue with Redbox, as it will not charge your card after cancellation.

Redbox refers to an entertainment company that deals with renting movies at a reasonable price. You can also rent video games through Redbox. Usually, you get a fixed period of a day to watch the rented movie and return it. Redbox offers the best video rental options in a cost-effective way, which can benefit many users.

You can find Redbox kiosks almost in every city, just like convenient vending machines. From these kiosks, you can purchase the video you want, watch it and return it by 9 p.m. the next day to avoid any additional charges.

Of course, the company will charge you for each extra day, so the pressure exists about returning the movie or game in time.

Why Is Redbox So Popular?

You get a wide selection of different movies and video games with Redbox that you can choose from. Mainly because they’re pretty cheap for the price and there is a convenient system of renting.

Redbox offers an easy way of renting movies or video games at a much low price rather than buying the disc permanently. So, if you don’t like what you’ve watched, you don’t need to regret wasting your money on the entire disc. This convenience has led to the widespread fame and popularity of Redbox.

Another reason behind Redbox’s fame is the easy pickup of movies from the Redbox kiosks, especially inside grocery stores and other shops, for customer satisfaction.

Now that you know all about Redbox, let’s talk about its cancellation procedure.

Talking about how cancellation works in Redbox, it is crucial to know how you can cancel your Redbox reservation. By doing this, your card won’t be charged through Redbox anymore.

This is important if you no longer want to avail Redbox’s service or if you’re planning to move to a different rental service. Here’s how you can cancel your Redbox reservation-

Redbox reservations can be canceled once the rental period is over. You can do this by contacting Redbox through their customer service phone number, company website, and even through DoNotPay. It’s easy to reach out to the Redbox customer support and cancel your reservation after your rental period ends.

Confirming With your Bank

To make things smooth and effective, you can confirm the message with your bank customer care involved with the card. In this way, your bank will get a heads up that you are not liable for any of the charges if your card gets lost or stolen somehow.

1. Are there consequences if I lose a Redbox movie?

If you lose a Redbox movie, it is advised to contact the Redbox customer service as soon as possible. Otherwise, you will be charged according to the daily rental fee, and after a certain period, you may be charged for the original price of the movie disk.

2. What is the timeframe in which I must return a Redbox movie?

You have one entire day to return a Redbox movie if you’ve rented your movie at around midnight, to be exact. This is applicable for renting a movie at 12.01 a.m. and returning within 9 p.m. the next day.

After this time, you will be charged according to the daily rental charge, including tax.

3. Does Redbox charge you immediately?

4. Can I keep a Redbox movie for an additional day after the rental period is over?

If you keep a Redbox movie an extra day after your rental period is over, you will be charged the daily rental fee, including any additional tax payment. This payment is applicable for an individual item, and it will follow similarly for multiple items.

5. When is it ideal to rent from Redbox?

The best time to rent from Redbox is after midnight since it provides you additional hours to watch your content without having to rush. If you start your rent at 12.01 a.m., you will have until 9 p.m. the next day to finish watching your movie, which is enough time for enjoying the film at your own pace.

Without a doubt, it can be said that Redbox is an excellent source of entertainment. But getting Redbox may lead to different issues related to purchasing and canceling their subscriptions.

You might need to cancel your card for some reason, and the question, can Redbox charge a cancelled card, might arise. But you rest assured and be in the clear of this doubt since Redbox will not charge your card once you cancel the service.

Can I Sell My House With A Tax Lien? – Make The Right Decision

What Is a Private Bank? The Rich Bank Differently Than You

How Much Does It Cost To Invest In Real Estate?