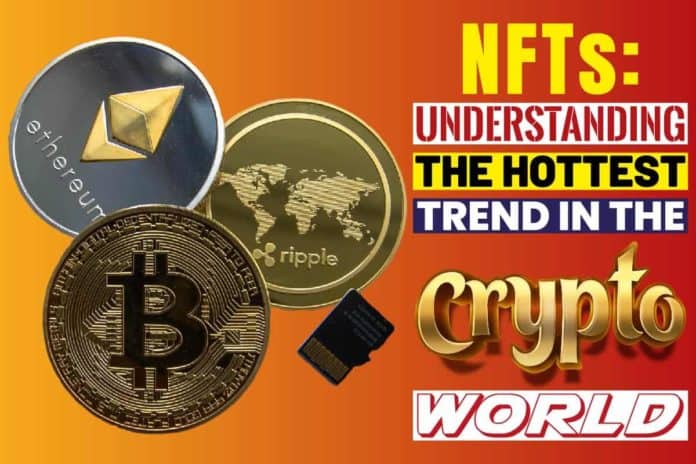 In the past few months, you might have read something about NFTs, or non-fungible tokens, and how they are changing the online world. Elon Musk seems to love them, and even sold a song about them as an NFT, Canadian singer Grimes sold several pieces of digital art as NFTs worth around US$6 million, and Jack Dorsey, the co-founder and CEO of Twitter, put up an autographed tweet for sale as a non-fungible token.

But you might’ve been left wondering “what in the world are NFTs?” or “what are they used for?”, as the topic seems to be a bit complicated. Well, worry no more, for we have prepared this article to explain what NFTs are, how they work, and what you can use them for. But before we start answering these questions, it’s important to understand the basis for the creation of NFTs: the blockchain.

In 2008, a group of unidentified developers, under the name of Satoshi Nakamoto, created the world’s first blockchain to serve as the public ledger for the first functioning cryptocurrency, Bitcoin. The blockchain is a sort of ledger, in which the records are called blocks and each one contains cryptographic hashes from the previous block, timestamps and transaction data that make it virtually unhackable. Since its development, blockchain technologies facilitated the creation of different standards and cryptocurrencies, and became the most used method to manage them.

Today, most NFTs are based on the Ethereum blockchain, which is a decentralized, open-source blockchain that features smart contract functionality, an integral part of non-fungible tokens. A smart contract is a transaction protocol that executes and documents the terms of a digital contract. Ethereum was created in 2015, and Ether, its native cryptocurrency, is currently the second-largest cryptocurrency in the world after Bitcoin. However, Ethereum also allows the creation of other cryptos and NFTs on top of its blockchain.

So, what are NFTs? Essentially, non-fungible tokens are non-interchangeable units of data on a blockchain, representing a unique digital item, such as pieces of digital art, videos and video prints, songs, and even items in video games. Through smart contracts, NFTs provide buyers with proof of ownership and the creative rights are bound to their creators. To be considered a NFT, these units of data must be irreplaceable and unique, thus creating scarcity, a basic concept for non-fungible assets.

Most NFTs are built on the Ethereum blockchain, using specific token standards called ERC utility tokens. These tokens contain a transaction history, artist information, some sort of serial number, and the Ethereum smart contract. They can be bought and sold in different decentralized marketplaces, such as Nifty Gateway and Open Sea, and you’ll probably need some money in the form of a cryptocurrency, like Bitcoin or Ether.

Due to the possibility of assuring the unique signature and ownership, digital art was one of the early uses of NFTs. On February 28 2021, Canadian pop singer and record producer Grimes put up a series of 10 pieces for sale on Nifty Gateway. The highest-selling piece was a video called “Death of the Old” that had a winning bid of almost US$390,000. Nearly 700 copies of the ten artworks were sold, amounting for a total of US$5.18 million.

In March 2021, two artworks by American digital artist Mike Winkelmann, also known as Beeple, were sold for millions of dollars: a collage entitled “Everydays – The First 5000 Days”, which was sold for US$69.3 million in a Christie’s auction, and a 10-second animated video of pedestrians walking on Donald Trump that was purchased for US$6.6 million at Nifty Gateway.

NFTs are also being used in video games, to represent unique items and even virtual building lots. That’s the case of the upcoming adventure game The Sandbox, developed and published by Animoca Brands. In this game, players can design and build multiple assets, like items, avatar equipment and scenery objects, and place them on building lots to create virtual worlds and interactive levels. Then, these assets can be sold in the form of NFTs in its decentralized marketplace, using the game’s own cryptocurrency called SAND, an ERC token on the Ethereum blockchain.

Also in March, skateboarding legend and entrepreneur Tony Hawk performed the 540 Ollie, a trick he mastered over thirty years ago, for the last time in his career, saying “Today I decided to do one more time… and never again. My willingness to slam unexpectedly into the flat bottom has waned greatly over the last decade”. The milestone was immortalized as a NFT and sold in an Ethereum marketplace. A portion of the proceeds from the sale was donated to charity institutions.

NFTs are creating a new market and a new medium for artists to promote their work, allowing them to expand and add value to the customer experience. However, it’s important to notice that some specialists have some concerns that this new online trend might be leading to a bubble burst in the near future.

Successful Strategies To Protect Your Business From Cyberattacks

Can You Deposit A Cashier’s Check At An Atm? A Perfect...