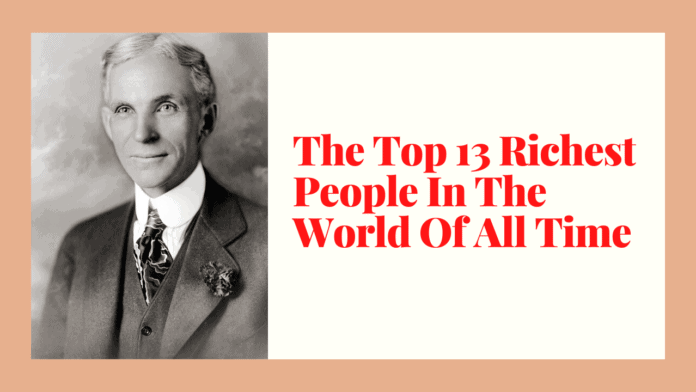 Today’s rich people’s list may include entrepreneurs, politicians, celebrities, and royals. However, don’t be surprised that the richest people in the world of all time are unfamiliar faces.

In this post, we looked at the wealthiest people who lived, from themedieval world to modern history. Their occupations, sources of wealth, wealth, and nationality were all considered. Continue reading to learn more!

Mansa Musa or Musa 1, the king of Timbuktu, is the richest person who ever lived. He was born into a family blessed with rulers. Mansa Abu-Bakr, his brother, ruled the Malian Empire until 1312. But it was under King Mansa Musa’s reign that the kingdom witnessed massive growth. Besides Timbuktu, Mansa successfully annexed approximately 24 cities.

Mansa’s control over a vast landmass gave him access to wealth so huge that historians struggled to estimate how rich the monarch was. According to a historical account by the British Museum, Mansa’s Malian Empire supplied half the gold consumed by the Old World.

Talk gold and salt, Mansa Musa had them in abundance. He was a devoted Muslim and visits Mecca with an entourage comprising of royal entertainers, camel drivers, slaves, and animals meant for food. In total, his entourage included approximately 60,000 men. Mansa Musa’s death marked the end of the Malian empire.

Today, many historians believe Mansa Musa’s richest cannot be accurately evaluated because he was so rich.

Source of wealth: Captured diverse economically viable territories and led an empire with 25% of global GDP

The Emperor, Akbar the great, also known as Akbar 1, was the wealthiest and greatest Mughal Emperor of all time. He’s also in the wealthiest people of all-time list for obvious reasons.

Besides his lavish lifestyle, Emperor Akbar had a great passion for art. He patronized stunning artworks and was one of the richest monarchs of the medieval era. Akbar never showed mercy to individuals who failed to recognize his supremacy. He consolidated the Mughal domain in Indian and conquered numerous economically viable territories, running into thousands of square miles.

One of the territories conquered is Gujarat, an area with various ports and one that dominated India’s trade with the Asian continent. During his reign, Akbar controlled approximately one-fourth of global GDP, which is roughly $21 trillion in today’s money.

According to a historical report by the University of Groningen in the Netherlands, India’s GDP per capita under Akbar’s reign was more than Germany, America, France, and Japan.

Source of wealth: Controlled 9.6% of global GDP while in power

Joseph Vissarionovich Stalin, nicknamed “Koba,” was a dreadful Soviet Union dictator and a victorious wartime leader. Stalin controlled one of the biggest global economies in his time. From 1941 to 1953, Joseph Stalin was the Soviet Union State’s premier. He dictatorially ruled and transformed the Soviet Union into a world power.

Joseph Stalin’s Soviet Union, in the 1950s, was responsible for approximately 9.5 percent of global economic output, which in 2014 equates to $7.5 trillion. It was also impossible to differentiate Stalin’s wealth from that of the USSR.

A University of Alabama professor, George O. Liber, pointed out that the USSR’s money belonged to the country and not Joseph Stalin. Nevertheless, Stalin’s position and power gave him free access to the country’s fortune. He can do whatever he wants with it.

Source of wealth: Controlled 25 to 30 percent of global GDP in his time.

Augustus Caesar, Julius Caesar’s adopted son, was the first Roman emperor. Augustus was the most successful emperor in the history of the Roman Empire. He ruled over the vast empire from 27 BC until his demise in 14 AD.

Augustus was so rich and powerful that at some point, he owned Egypt. Thanks to his unlimited efficiency and skill, the Greco-Roman world experienced durable prosperity and peace.

The Pax Romana, which refers to the peace Emperor Augustus created and maintained under his rulership, made the Roman Empire’s economy flourish.

Source of wealth:  Taxes, trade, gifts and tributes from other countries

The United Kingdom of Israel’s third and last ruler, King Solomon, is revered in Christianity for his wisdom. According to the Bible, Solomon’s wisdom came from God. He offered sacrifices to God, who appeared in his dream and asked him to request for anything. The Bible recorded that Solomon didn’t request for riches from God but wisdom to lead His people.

King Solomon ruled over Israel for 40 years and pocketed 25 tons of gold as taxes annually, which is a huge amount in today’s money. The biblical ruler amassed great wealth from taxes, trade, gifts, and tributes. According to Hebrew Scriptures, “King Solomon made gold and silver as common as stones in Jerusalem.”

John Davison Rockefeller Sr. was an American businessman that doesn’t need much introduction. He’s regarded as the richest man in the history of the country. John D. Rockefeller Sr. established Standard Oil, a company that got incorporated in 1870. History recounts that he was a diligent and careful businessman, who never took unnecessary business risks.

John D. Rockefeller sensed a huge opportunity in the US oil business in the 1860s and took advantage of it. The industrialist built his first oil refinery in 1863, near Cleveland.

John Davison Rockefeller’s Standard Oil business flourished, thanks to a favorable industry and economic condition. He bought over competitors and controlled 90 percent of the United States oil business back then. According to an economist, Peter Bernstein, John D Rockefeller’s fortune in today’s money is worth $367 billion.

Source of wealth: Invested in the steel industry, and owns Carnegie Steel Company

Andrew Carnegie was another mega-rich American businessman. He was born in Scotland in 1835. In 1848, Carnegie’s family migrated to the United States of America in search of greener pastures.

Andrew Carnegie went from rags to riches. That was his story. While in the US, he worked with the railroad and invested money in oil and iron businesses. Andrew Carnegie started reaping the fruit of his labor and investments in his early 30s.

Andrew Carnegie ventured into the steel business, where fortune smiled on him. He led the American steel industry expansion in the late 19th century. In 1901, he sold the Carnegie Steel Company to JP Morgan for $480 million, and 90 percent of his fortune went to charities. In today’s money, Carnegie is worth $337 billion.

Source of wealth: An emperor who had access to his kingdom’s fortune.

Crowned in 1894, Tsar Nicholas II was Russia’s last emperor. He was the country’s last Tsar, under the Romanov reign. The emperor ruled Russia from 1894 to 1917 and was later executed by his subjects. Tsar Nicholas II made several bad decisions that plunged citizens, including Russian soldiers, into severe hardship.

Tsar Nicholas II had complete access to his kingdom’s coffers and does whatever he pleases with the fortune. His access to Russia’s fortune made him one of the richest Emperors at the time. A 1916 evaluation of Tsar Nicholas II’s fortune revealed how rich the emperor was back then. And in today’s money, Tsar Nicholas II is worth $300 billion.

Dubbed “Fugger the rich,” Jakob Fugger was the wealthiest and most influential person in Renaissance Europe. Even after Fugger’s death, his influence in royal affairs continued to shape the continent’s history for years.

Jakob Fugger was a banker and mining pioneer, who signed mouthwatering financial contracts with the then Holy Roman Empire. Thanks to these lucrative contracts, he received land holdings and profitable concessions in trade and mining. In today’s money, Jakob Fugger is worth $277 billion.

Source of wealth: Lands and treasures seized from territories conquered

Crowned in December 1066, William the conqueror, England’s first Norman ruler, was a no-nonsense monarch. He imposed his will on the people and deals with anyone who dares to stand in his way.

William invaded England in 1066 and greatly influenced the course of the country’s history. His childhood days were marred with challenges, but that didn’t derail William’s aspirations. Today, he’s the most influential monarch in British history.

William seized many economically viable lands and treasures from Sussex to Yorkshire. Through these means, he amassed a considerable fortune that worth $228 billion in today’s money.

Gaddafi ruled Libya as an authoritarian dictator for over 40 years before being deposed by dissidents supported by NATO troops. Gaddafi got killed in Sirte, his hometown, on October 20, 2011.

Following Gaddafi’s death in 2011, officials in the country discovered that he stashed over $200 billion in diverse bank accounts. The Libyan dictator got involved in several shady real estate and investment deals.

While in power, Gaddafi looted billions of dollars from Libya’s colossal oil revenue. He ruled like medieval monarchs who treated their kingdoms’ treasures as theirs. 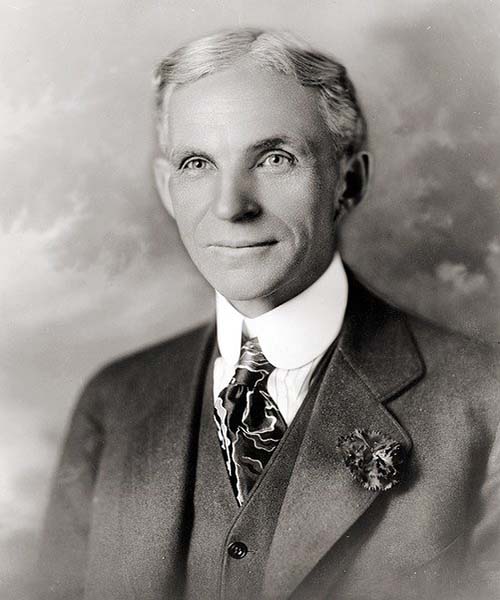 Henry Ford developed and sold millions of vehicles, thanks to his assembly line system of vehicle production. Over a million cars were sold in 1920 by the world-famous businessman. Ford Motor Company was hugely profitable, and in today’s money, Henry Ford should worth $200 billion.

Bill Gates and Paul Allen, his childhood friend, founded Microsoft in 1975. In 1994, Bill Gates was crowned the richest man in the United States of America. He was 38 years and worth $9.35 billion then.

Today, the Microsoft Co-founder is worth over $144 billion.

So these are the top 13 richest people in the world of all time. They consist of successful entrepreneurs to powerful monarchs, who controlled their kingdoms’ fortunes. These men massed so much wealth during their time. They were the richest in their time either by investments made or positions as rulers of their territories.

Why Is Cash App Asking For My SSN: All You Need To Know About...

Does the Apple Credit Card Discriminate Against Women?

Can I Transfer Money From My Emerald Card To A Bank...

How Does a Credit Card Work? [Simple Guide and Definition]