Home Tech Why Did The Trade Federation Invade Naboo 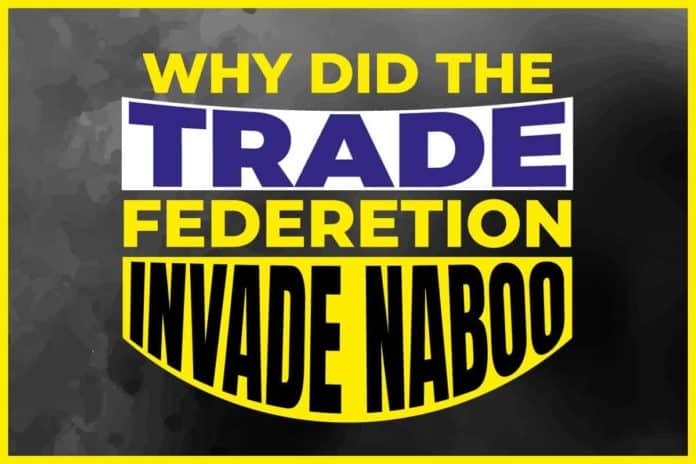 If you’ve just got up from watching Phantom Menace, then it’s highly likely that some questions have occurred to you. And one of them has to be – why did the trade federation invade Naboo?

Darth Sidious instigated and engineered an attack against his home planet by the Trade Federation. He perpetually used the Federation as a way to conduct his plans of rising to power. This entire chaos led to the famous ‘Naboo Crisis,’ where evil and greed were the root of all causes.

Here’s everything you need to know about the ‘Invasion of Naboo.’ That too, from a strategic standpoint. So sit back and relax as we walk you through the entire series of events.

A Brief History On The Trade Federation And Naboo

Unlike most other articles out there, our purpose is not to delve deep into details. Rather we intend to deliver a straightforward explanation of the entire thing. Here’s concise intel on both the Federation and Naboo, just in case you need a little brushing up.

The Trade federation of the Star Wars franchise is just an embodiment of greedy corporate bodies. Their main infantry is the battle droids. However, they have an armada of battleships for their trade route regulation as well. By pairing goals with Darth Sidious, the Federation aims to rob Naboo of its resources.

Gungans and humans were the only ones to live on the planet. Everyone believes the planet to be very peaceful and free from the negativity and soreness of evil. However, certain individuals such as Darth Sidious have proved all of them wrong as he brought upon the crackdown of his greed.

That very crisis’ responsibilities fell on the shoulders of the then newly elected Queen, Padmé Amidala. Although she was successful in resisting the invasion, the planet had to suffer extensive loss.

Why Did the Trade Federation Invade Naboo?

There are two sides to why the Federation invaded Naboo. One consists of the primary reasons, whereas the other covers the strategic standpoints. The following section is for you to understand the reasons more precisely –

The first and foremost reason why Naboo became a potential target was that it was rich in Plasma. Now, Plasma was an asset with unique electromagnetic properties that the Federation couldn’t hold back their greed for. Hence, leading the Federation to initiate an invasion on the pacifist planet in the first place.

However, resources were not the only reason. Naboo was also number one on their potential list of targets for another crucial reason as well. And that is weakness. It was highly unlikely that the planet would be able to resist an invasion. So they would be able to force Queen Amidala to sign the treaty without casualties.

The Trade Federation wouldn’t be targeting Naboo in the first place if it weren’t for Palpatine and his greed for power. This certain individual became so power-driven that he couldn’t control his lust and eventually ended up harming his home planet. Indeed, he was a clever mastermind as he played out both sides of the war.

Darth Sidious strategically initiated the plans for invading Naboo. He not only provided the Federation with Intel but also assured them of the treaty so that the invasion could be made legal. The blockade would lead to his promotion to Supreme Chancellor.

Invasion Of Naboo: Treacherous Or Sagacious?

Palpatine was a mastermind; he sold his planet for his benefit. But his actions weren’t considered treacherous because almost no one was able to identify him as the bad guy. Rather, he was very strategic in staying close to the Queen to manipulate. Fortunately for him, it worked, and he was promoted duly.

Sidious told the Federation that Queen Amidala was young and naive, and controlling her would not be difficult. By showing such confidence in manipulation of the planet, the Federation was led to believe that initiating an attack would be worth it.

Since Palpatine controlled both sides, the potential outcome of the blockade didn’t matter to him. If the Federation won, that would lead to him being the powerful authority of Naboo. If they didn’t win and Naboo was successful in resisting the invasion, then he’d still be a hero. Now, that’s a plan plain sharp, shrewd, and evil!

1. Was the Trade Federation blockade legal?

No, the blockade wasn’t legal. It’s sort of similar to an in-house protest. However, if the Federation was successful in making Amidala sign the treaty, then the case would be different. The signature would then make the entire invasion legal.

2. Why did the Galactic Republic allow the Trade Federation to have an army?

Even though the Galactic Republic sounds like a governing body for all the states, that’s not the case. Rather the Galactic Republic is a committee formed with the leaders and representatives. Therefore they do not have the right to interfere in their members’ organization, military, and laws.

3. Why are Naboo rulers so young in age?

When the people of Naboo elect their Kings and Queens, they are electing from the members of the noble houses. As a result, not everyone gets to run for the ruler. The Naboo rulers are teenagers because all potential candidates are young (in the first place).

Nothing But A Necessary Crisis!

If you’re still wondering why did the Trade Federation invade Naboo, then here’s the answer shrunk in a single sentence – because Palpatine wanted to play both sides of the game for his benefit. His lust for power and greed led him to cruelly sacrifice his own planet.

And that’s everything you need to know on this matter. Our goal was to compile all of the necessary information in one segment and deliver it to our readers. We hope you enjoyed the journey. Stay safe, and may the Force be with you!

Have Cardboard Boxes? Here’s How to Get Rid of Them!

How to Decode Your Customer Data

Everyone wishes they had more money to pay for their bills, to take vacations or spend on things they want. While you can work...

To keep employees and regulators alike on-side, you need to make sure that your payroll management abilities are on-point. This is easier said than done,...

It would be best to make sense of IRA rules regarding how much tax to withhold from ira withdrawal. The IRS typically requires that...

If you are a resident in California or plan to move there, then you are probably familiar with the sky-high vehicle registration fee over...

Ever so often, cryptocurrencies tend to take a dip in their value. Sometimes that dip is more like a downfall rather than a fluctuation....