Home Money What is the G7? 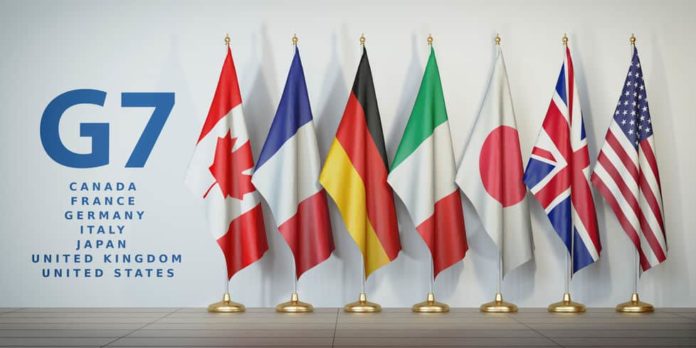 What is the G7 and why was it Established?

G7 also referred to as the Group of Seven, consists of seven of the world’s largest, well-developed and highly-advanced nations. They were established in 1975 and have nearly 50 years of rich history.

The main purpose of the G7 is to allow the world leaders of the seven most influential and well-industrialized nations to come together to promote global change. They meet on an annual basis in various countries to discuss the top international issues of the day. For the most part, the global issues consist of security, politics, economics, social and other pertinent issues.

The world leaders consist of ministers of finance, chief ministers, presidents, prime ministers, and other political leaders. It provides an international forum whereby the heads of governing bodies can discuss and promote regulations that have an impact on international trade, the financial markets and global economic growth overall.

Last year Canada hosted its summit in Quebec on June 8-9. The organization is now embarking upon its 45th annual summit scheduled to take place August 24-26, 2019 in Biarritz in Nouvelle-Aquitaine, France.

Who are the Members of the G7?

There are seven different countries that are comprised of the G7. Unlike the G20, which is made up of both developed and undeveloped nations, (explained in more detail below,) the G7 consists only of well-established, developed countries.

This mixture of the world’s most advanced and wealthiest countries represent roughly 62 percent of the total global net worth estimated at $280 trillion. According to the Council on Foreign Relations, the aggregate gross domestic product of the G7 members currently accounts for close to 50% of the global economy at the time of this writing.

Which Members Lead of the G7?

There is no specific president or leader of the G7. However, the group assigns a president to serve a one year term. The president is reassigned on an annual basis by rotating the members based on their country. For example, a new term begins on January 1 of each year by rotating president in the following order:

The role of the leader is typically responsible for creating an agenda based on the most urgent global issues. They are also responsible for arranging the logistics for the annual summit.

Various meetings take place prior to national leaders coming together. These meetings are attended by ministers and envoys who are also referred to as sherpas. They discuss conflicts and various policy initiatives so that they can be ironed out prior to the larger meetings with the national leaders.

Members From the European Union

However, in 1976 Canada joined in an effort to provide a venue for those powers-at-be who was non-communist. They used the platform to address pressing issues at that time, such as global economic issues that addressed inflation and the threat of a recession that was triggered by the Organization of the Petroleum Exporting Countries (OPEC) oil embargo.

The G7 is a Non-Legislative Body

The G7 is a multi-governmental forum comprised of world leaders. However, because it is not a formal institution that has a charter, a secretariat or is a legislative body, no legal impact takes place when decisions are made. But the group’s members are able to shape and influence the financial policies as well as seek to obtain cooperation from their members. These include the heads of state, ministers of finance, and other governing bodies.

What is the G8 and how are they Associated With the G7?

Quite similar to the G7, the G8 was formed to include Russia during the years of 1998 through 2014. During this period, the G7 was then known as the G8.

Russia was later suspended from the group after the annexation of Crimea. This created a challenge for the G8 as tensions with Russia were infused. They disagreed over a wide variety of issues, including climate policies, international trade, and the development of a new forum to include the creation of the G20 that would later include the developing nations.

As of the date of this writing, Russia remains uninvolved with this group and the organization consequently continues to operate as the G7.

How did the G7 Include Developing Nations in Their Efforts?

Although the G7 has been established for nearly 50 years, many criticize its ability to follow through. For several years they were also criticized for initially excluding leaders of emerging nations. As a result, a similar organization, referred to as the G20 was formed in 1999 to include the additional leaders of the developing nations. In doing so, the policies and economic concerns of developing nations could also be addressed as well. More about this in the section that follows.

In the G7s effort to include underdeveloped nations in their global forums, they added 12 additional nations and the EU to their organization as indicated above. They consist of:

Basically, the established, well-developed nations combined their efforts with the developing nations to become a group of 20, hence the name G20. So within the G20 lies the members of the G7.

The primary purpose was to create a forum where the seven strongest nations in the world and the developing nations could all participate and have a voice.

The G7 also refers to itself as “a community of values”. They believe they have the wherewithal to promote both freedom and human rights, the democracy and the laws of the land, prosperity and the sustainable development of nations. Their primary goal is to exchange ideas and develop possible solutions to the crisis’ impacting our global economy.

According to the BBC, both civil servants and ministers from the G7 countries meet during the year to discuss a wide variety of issues and mutual interests. During previous summons issues such as HIV and AIDS, global security, climate changes, and energy policies were some topics of discussion and proposed solutions.

What are some of the G7s Current Agenda Items?

Because the G7 is designed to discuss the top issues of the day, according to EURO News, one of the hot topics was about providing emergency aid needed to fund the Amazon wildfires. It is estimated that $20 million was to be provided by G7, including Canada, Germany, Britain, Japan, Italy in the US.

Additionally, there’s been discussions about the agreement on France’s GAFA tax and its impact on leading technology Corporations such as Facebook, Google, Amazon, and Apple. As a result, further discussions are underway to modernize the international financial system as it relates to the GAFA tax.

There have also been discussions concerning the modernization of the general laws concerning world trade. Members of the G7 would like an overhaul of the World Trade organization so that it does a better job of protecting intellectual property, eliminating unfair practices and solving disputes. Other topics consist of the trade wars between the US and China.

Among other topics, many awaited for the first encounter between Donald Trump, the president of the United States and Boris Johnson, the British Prime Minister of the UK according to Euro News.

Johnson, one of the newer members to attend the G7 summit met with Donald Trump for bilateral discussions concerning international trades between the US and British businesses.

What Happens After the G7 Summit is Over?

Although there are various bilateral talks that take place between smaller groups, once the G7 summit is over a communique is signed and issued to all the participants. It outlines items that have been agreed to between various countries as a result of the discussions that have taken place. However, according to the International Business Times (IB Times), the 2019 summit will end without any formal agreements taken place for the first time in its 44 year history according to the IB Times.

At previous summons, there is a joint communique signed by all of the participants by the end of the summit. However, this year this did not occur as a result of President Donald Trump refusing to sign the summit joint agreement

As with most G7 summits, thousands of protesters come out and protest near the venue where the summit is being held. This year at the 2019 G7 Summit held in Biarritz in Nouvelle-Aquitaine, France, thousands of protesters came out to march near the French coastal resort of Biarritz according to CNN. This was their attempt to demand that actions are taken from world leaders about a wide variety of issues. For example, some were concerns about the policies surrounding climate changes whereas others were concerned about anti-globalization, industrial issues and other matters that impacted the global economy.

There was a variety of activists present including the yellow vest protesters, the Basque separatist, environmental activist, the anti-globalist protesters, and more.

According to a spokesperson and protest organizer, 15,000 people were estimated to have taken to the streets to protest against various issues.

To conclude, although the G7 summit has been instrumental in providing a platform for dialogue between some of the world’s most powerful nations, ongoing trade tensions not only have an impact on the summit itself but on the economy as a whole. Hopefully, discussions that take place during the year will assist leaders with ironing out some of the biggest threats that face our global economy.

Tips On How To Close Green Dot Account: What Green Dot...