Home Money What is Corruption? 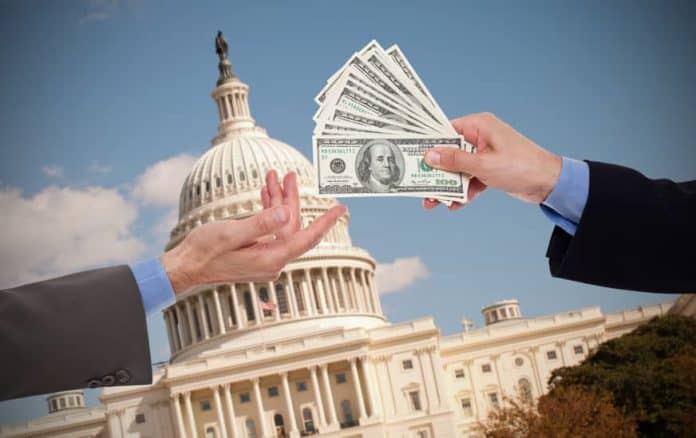 Regardless of the form of government in a country, citizens understandably expect their political leaders to look out for their best interests. Governments generally establish and maintain social order, provide a national defense system, establish structure to promote a healthy economy and provide essential public services. These factors each play a vital role in the quality of life that the country’s citizens enjoy. Unfortunately, corruption in governments around the world is common, and the impact to citizens can be severe.

Type of Corruption in Governments

There are various types of corruption that can plague governments, and these all involve a political figure who is trusted by citizens and knowingly is unethical. These politicians or leaders may act dishonestly or may even break the law in order to gain personally in various ways. Corruption can occur at all levels of the government. This includes petty corruption in small departments in a local government, grand corruption that takes places at the highest echelons of a government’s structure and numerous levels in between these extremes. Types of corruption may be broken down in greater detail in these ways.

Corruption in the Public Sector: Appointed government officials may accept bribes from individuals, corporations or organizations. These people or entities may be trying to secure grants, obtain licenses and achieve other results that they otherwise may not be able to enjoy. Financial incentives may also be offered to government officials to impact who contracts are awarded to, the hiring or promotion of specific individuals and more.

Political Corruption: Political corruption occurs when elected officials are influenced through bribes, extortion, solicitation or personal gain and place their interests above the interests of constituents. One example is when corporations purchase a politician’s vote. Another example is when government funds that are allocated for a specific public benefit are purposely reallocated to the politician or to other individuals or groups. By doing so, the funds are used for private gain rather than for the citizens’ benefit.

Judicial System Corruption: The judicial system is responsible for resolving disputes under the letter of the law and ensuring that the laws are enforced uniformly and fairly. Judicial corruption may occur when judges accept bribes or receive other gifts in exchange for a more favorable ruling. Corruption can extend to jurors, witnesses and other key players in the judicial system who are influenced by bribes or extortion.

As you can see, corruption within the government can occur at all levels and may impact any elected or appointed individuals, departments or even entire branches of government. Acts of corruption are found in various forms, such as nepotism, favoritism, abuse of powers and more. Many cases of corruption in the government are related to unethical actions that lead personal financial gain. Bribery is one of the more common types of financial corruption. It often involves a direct gift of funds in exchange for a desired outcome. It may also involve expensive gifts and other financial incentives. Unfortunately, when government leaders cross the line and accept bribes, they may be more likely to be influenced in the future by extortion or blackmail. These may include demands for hush money under the threat of exposing financial corruption.

Another type of financial corruption in government involves embezzlement. This occurs when public funds are illegally used for purposes that they were not allocated for. This is closely related to fraud, which involves deceiving an individual or company to give up their funds under false pretenses. In some cases, corruption may include scams at the government level, doling out foreign aid for nefarious and hidden purposes or creating shadow companies to channel public funds into private hands.

The Impact of Financial Corruption in Government

Financial corruption in the government has devastating consequences. Before corrupt acts are exposed, citizens may be negatively affected in minor or significant ways. For example, judicial corruption can lead to a wrongful conviction. Bribes and kickbacks can result in government officials making decisions that are not in the public’s best interests. Specific individuals, groups or companies may gain an unfair advantage and preferential treatment as a result. In these and other similar situations, the public is unaware that corrupt acts are negatively impacting them, but they nonetheless feel the effects. National welfare and defense, civil services and other essential governmental functions may be affected, and the citizens may become increasingly discontent. Over time, protests, riots and other forms of civil unrest may occur.

When financial corruption is exposed, guilty parties may be prosecuted. Public outrage may be focused on the lack of oversight, loopholes or other factors that contributed to the corruption. There may be a call for reform. Systemic or ongoing corruption may erode infrastructure and unity. Exposed corruption may also have significant economic impacts, lead to major political shifts or revolts, deteriorate culture and have other serious ramifications.

Corruption in the United States is problematic, and cases are widely publicized. One of many examples involves Pennsylvania’s Treasurer, Bud Dwyer. Under his leadership in the late 1980s, the state realized that it collected too much personal income tax from government employees. In order to address the issue, Dwyer awarded a $4.6 million contract to a California tech firm that was tasked with determining each individual’s tax refund amount. Dwyer personally received a $300,000 kickback from this firm. This is one of many stories of government corruption throughout the country’s history.

However, comparatively, many countries around the world are considerably more corrupt. For example, Somalia technically has a central government. This government is weak and is easily manipulated by warring factions. The government has not been able to effectively run the country or work in the best interests of its people. As a result, less than one-third of Somalia’s population has received any level of public education. Social programs, such as those involving public health and welfare, have not been developed. This may be one reason why the life expectancy in Somalia is only 55 years.

North Korea has a dictatorship that operates with significant secrecy, and it has a healthy GDP that has totaled tens of billions of dollars in recent years. Despite this, many of its citizens struggle with hunger and poor healthcare. Some other countries have provided aid to help North Korea’s citizens, but this aid has not reached all who need it. At the same time, North Korea has a well-funded and advanced military that strives to rival that of major superpowers.

Afghanistan also ranks high on a list of countries with corrupt governments. Like Somalia, Afghanistan has a weak central government that is influenced by numerous warlords and organizations vying for power. Because of these influences, the government cannot adequately provide for its citizens. In addition, the former president of Afghanistan accepted bribes from foreign militaries in exchange for various favors.

In 1989, Sudan’s corrupt government was overthrown by a major coup. The political group that gained control of the government has now been in charge for 30 years, but it has not been able to overcome significant corruption issues. These include competing factions that have deteriorated the economy. Notably, the country has fractured into two separate territories, which are Sudan and South Sudan. South Sudan controls most of the area’s oil reserves, which the country has heavily relied on for economic health. As a new jurisdiction with a governmental system still being formed, corruption is rampant in South Sudan.

Angola is located in western Africa and is home to huge oil reserves. Some issues with corruption at the government level have occurred as others have tried to manipulate control over these valuable reserves. Many government officials have also been accused of embezzlement, money laundering and stealing government assets in recent years.

Likewise, oil reserves in Iraq have made it a target for unscrupulous profiteering. Iraq has not yet established a strong central government after the American invasion, and it is still struggling to rebuild its infrastructure. Bribes from contractors interested in profiting from the reconstruction process are common. Some outside interests have also attempted to manipulate the company and gain greater control over its oil reserves.

Venezuela nationalized the control of its oil reserves. The intention was to provide the financial benefits from the country’s natural reserves directly to its people. However, a substantial amount of the money is flowing into the hands of top government officials. This is one of the reasons for the country’s significant economic turmoil and social unrest.

Haiti has been impacted by financial corruption for many years, such as from collusion between wealthy individuals and government officials. The ramifications of this corruption were on display when a major earthquake devastated the area in 2010. Several hundred thousand people died in the earthquake, and the corrupt government’s weakness was obvious through its inability to support its citizens and provide for fast reconstruction after the quake.

Political corruption has been problematic in civilizations around the world throughout modern history. Its effects have been well-documented, and the problem unfortunately may continue as long as public officials choose to place their interests above the interests of the citizens who they work for.

Why Is The Won So Inflated

New Technologies That Are Revolutionizing Businesses In 2022

Does Target Have Money Orders: How To Get The Most Out...

Create a professional resume online – How to get hired for...