Home Taxes Are Plasma Donations Taxable | Know All The Details 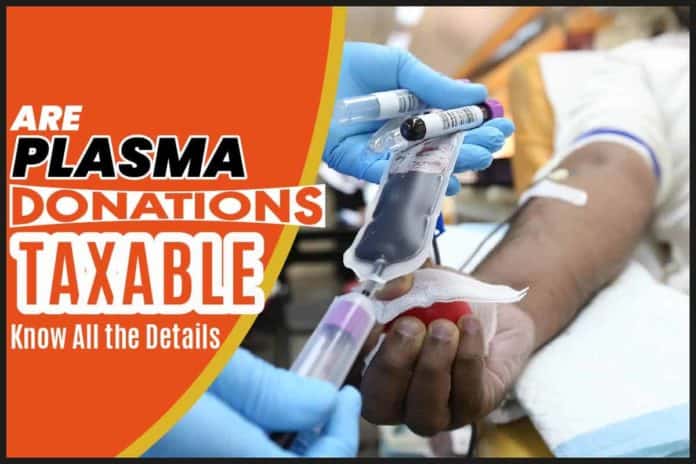 Plasma donations have become an everyday affair ever since the outbreak of COVID-19 has surged worldwide. Even without the pandemic, plasma donation has been in prevalence for different health issues.

With plasma donations being more widespread at the present day, the question, are plasma donations taxable, often crosses the mind of people. Especially if you or someone in your family has been a plasma donor for some time or planning to be a donor, curiosity is bound to arise.

To answer shortly, yes, plasma donations are taxable, and they fall under the category of self-employment tax. Especially when you’ve been donating plasma for a long time, it implies that you’re involved in the plasma donation business, and it is counted as a form of self-employed or unaffiliated tax.

Why Plasma Donations Are Taxable

Plasma donations are often mistaken to be simply ‘donations’ for which many people assume that earnings from plasma donations should be exempt from tax.

It is also assumed that since it is a donation of ‘plasma’ which is a ‘body fluid,’ it should be devoid of taxes. Since taxes cannot be paid on body fluids, people assume that it applies to plasma donations as well. However, that is not the case.

Plasma donation as taxable income can be a source of curiosity to many people. Let’s see why Your Plasma Donation May Be Taxable-

Plasma donations can lead up to a compensation payment of a huge sum of money which makes it fall under a taxable source of income. Especially if you’ve donated your plasma a lot of times, it values a large amount of money which is reportable as taxable earning.

Especially donors who have been in the trade of plasma donation for a long time and have acquired a sum total of hundreds of dollars, plasma donation tax equalizes to self-employment tax for them. Lawfully, they are not exempt from this tax.

Donating plasma is an ethical service, even if it pays you.

If you’re planning to start donating plasma and earn some money on the side, it is important to know if you meet the requirements. In other words, check if you’re eligible for donating plasma. If you do not meet the criteria for donating plasma, it becomes unethical and can cause potential health risks to the recipients.

If you meet these requirements, you’re eligible to donate your plasma. It is still advised to take a physical examination test Before You Donate Plasma to be completely sure if your health is perfect for plasma donation.

Risks And Side Effects Of Donating Plasma

No matter how noble plasma donating is, it can take a toll on your health if you’re not careful. Plasma Donation itself comes with a lot of risks and side effects, especially if you lack proper knowledge about it. If this is your first time, you need to be more careful since the side effects might be a lot worse.

This is the most common side effect that plasma donors face, especially with their first time. Temporary reduction of plasma from the body minimizes the flow of oxygen in the body, which may result in slight dizziness.

The dizziness is associated with getting up from a sitting or lying position and can aggravate during movement. But it usually gets relieved after 6-8 hours since the oxygen flow becomes normal in your bloodstream within this time.

After dizziness comes the feeling of fatigue, this is also partially due to irregular oxygen transportation within the bloodstream. It usually passes away after taking adequate rest and sleep.

Discoloration and signs of bruising may appear due to improper insertion of a needle in the vein during donation. It may be painful too and usually lasts for a few days.

Dehydration is an alarming side effect that occurs as a result of plasma donation. It results from donating plasma frequently within a short span of time, causing a decrease in the fluid and mineral content of the blood.

So, make sure you take plenty of fluid after plasma donation. Dehydration in severe cases can even cause seizures, so it is a matter of serious concern.

1. What is Blood Plasma and Why is it Needed?

Plasma is the liquid part of the blood that does not contain any cellular components and contains protein and antibodies. It is needed for supplying to patients with trauma, burns, and those suffering from reduced blood volume issues. Plasma is also needed for patients with liver insufficiency and other health hazards.

2. What is Donated Plasma Used For?

3. How Long Does Donating Plasma Take?

Donating plasma takes around 1 hour to an hour 15 minutes approximately. For beginners, it may also take up to 2 hours to donate plasma from the source. The whole process involves drawing blood and then removing the plasma carefully under medical supervision.

4. Are There Long-Term Side Effects of Donating Plasma Frequently?

Nothing is good if done frequently; a similar case is seen with plasma donation. Frequently donating plasma can lead to the development of long-term side effects like low red blood cell count, i.e., anemia. This condition can cause severe weakness and fatigue.

5. How Often Can You Donate Plasma?

You can donate plasma every 28 days, but it is better to take a month or two gaps in the first few times. You can also take a gap if you feel your health deteriorating after each plasma donation. Usually, it is permitted to donate plasma 11-12 times a year.

To end the article, it can be said that plasma donation is a noble and moral work despite the fact that it pays you every time you donate. Since it results in acquiring a large sum of money and falls under self-employment, it is not exempt from taxation.

So, if you’re looking for an answer to your query, are plasma donations taxable, then it can be concluded that this donation is taxable.

How to Fix a 579 Credit Score: 5 Credit-Boosting Tips

What To Do With Old Checkbooks: How To Get Rid Of...

Where To Find An Investor For Your First Project