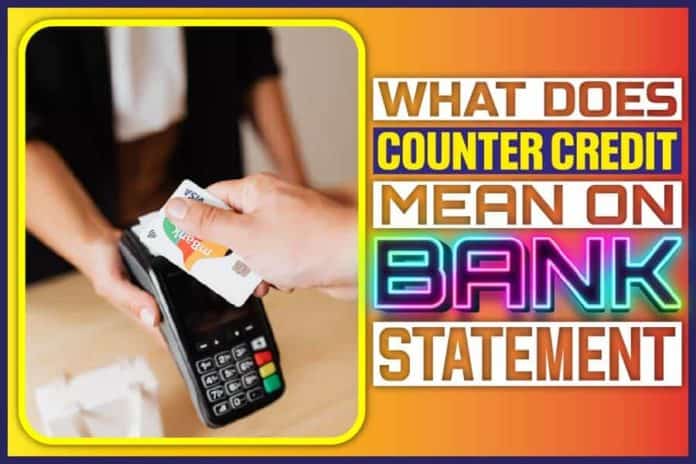 Banking has grown better over the years, and it has brought up new ways for customers to spend money and make their lives more convenient.

One of these ways is using debit and credit cards that allow customers to spend even when they are not in the best financial positions.

These amazing developments have come with new challenges, the biggest of them being credit card fraud.

We need to understand this issue and how you can survive it to keep your accounts and money safe; let’s get into it;

What Does Counter Credit Mean On Bank Statement?

Counter credit implies that you added money to your account over the counter. You could add money to the account through online transactions, but if you physically go to a bank and make a deposit, it will reflect as a counter credit on your bank statement. This is generally the most direct way to deposit into your account.

Bank statements are reports a bank gives to its customer on the beginning and ending cash balances and any changes in the account over a given period. This is a document from the bank, not internally generated.

Most people will then compare the bank statements to their internal records to ensure no error or fraud in their balance.

Usually, you would get the bank statements monthly, and this is the recommended choice by professionals.

Getting bank statements each month makes it easier for you to reconcile your records since there is enough data to work with without getting confused by the transactions. If you waited several months to reconcile, you might end up losing some important transactions.

You will see all transactions you made during the month, including additions to the account. You should see the sum, where it came from, and when the transaction happened. Most statements are detailed and show each transaction.

You need to go through all the transactions to find anomalies or missing transactions that indicate a bigger problem. After the reconciliations, you can now store your records and the statements for future use.

You can choose to get digitized statements through your email to make it easier for you to store and access them on your devices. Whenever you need it in hard copy, you can print it out and use it while retaining the original form on your phone.

Credit card statements are equally important, and you should give them more attention. Credit card fraud is becoming a major concern, and some thieves are smart about it. They will spend small amounts that will not flag any alarms, so you have to find it yourself.

You need to keep a separate record of all your purchases using the credit card, so you have a value that you expect at the end of the month. If the value is bigger than it should be, look at all the transactions and find the problem.

If your card number is compromised, you need to report it to the credit card company immediately so they can block the number and prevent more damage. In case you lose your credit card, call the company and cancel it immediately.

The international banking system is a complex setup that takes a lot of effort to understand. There are over 30,000 banks globally holding an incredible amount of assets. The ten biggest banks alone hold about $25 trillion in assets.

Initially, merchants created banks to store cash and make life easier for people. Ships would sail long distances with coins to use in transactions, but this brought up an issue due to the threat of fraud or robbery, so the merchants needed a new business model.

Banks do risk management, customers store their money in banks, and they receive interest as long as their money is in the banks. The bank procures the funds and loans them to other people at more significant interest rates.

This is a calculated risk, and there are safety mechanisms in place should some lenders don’t pay their credits.

This is vital for our economy since it provides people with funds to buy properties and start businesses.

In a nutshell, banks take funds that people aren’t using and give them to people who need to build the economy.

Banks have other sources of income that allow them to have enough reserve cash so they can give you your money whenever you need it.

The most significant issue with banks is that many have focused on short-term financial benefits with higher risks.

Amid the financial boom, most banks developed barely comprehensible constructs and traded to make fast money.

This was like gambling, and it damaged a lot of economies and societies, leading to one of the worst financial downfalls in history.

Millions of people lost their jobs and money, which led to some major banks paying billions in fines.

The European Union and US Government had to put out massive bail-out packages to prevent the banks from going bankrupt.

The Unions came up with new regulations to govern the banking business and avert another crisis. This included the requirement for banks to have emergency funds to prevent such a disaster.

Today, new financing models are becoming popular, like investment banks that charge yearly and don’t get commissions on sales.

Credit unions have also been embraced, and they help their users start businesses through which they can sustain themselves.

Crowdfunding is another common business model, and it goes around a bank as a middleman. This model allows people to get loans from a large group of small investors that give small amounts of money; therefore, the damage isn’t too much should the project fail.

Aren’t credit cards amazing? You can buy stuff now and pay for them later when you have the money.

There is a big difference between using your card irresponsibly and someone else deciding to run some charges on your account.

In this digital era, it is much easier for people to steal your credit card information and steal your money rather than rob banks.

You need to be careful and react fast when you lose your credit card to prevent getting ripped off.

While this might seem creepy, it is a crucial part of how credit card companies detect fraud. You will use your card to buy things around your home and workplace, and eventually, you will build a profile of your spending habits and locations.

When a transaction goes through for more money than you usually spend or in a different location than you frequent, the card company’s payment processor will trigger it as a potentially fraudulent purchase.

This doesn’t mean that your credit card won’t work if you go to a location far away from your home.

The computers look for patterns that aren’t obvious to humans to allow you to move freely and make irregular purchases without getting locked out.

Most thieves will make smaller purchases to test your card before going big, so small purchases followed by very large ones will raise the alarm. The company will have an IP address of the location from which the card is being used.

You will get a fraud alert on your PC or phone if the transaction is suspicious to help you stop a scam before you have to pay for it.

This is the same with bank accounts; if someone drains money from your bank account, you can legally get a full refund if you report it fast enough.

These systems are imperfect, so you should inform the credit card company whenever you plan a trip or big purchase; otherwise, you will get locked out of your account. Keep an eye on your statement and credit card to avoid being a victim.

Counter credit on your bank statement implies that you made a physical deposit at the bank over the counter hence the name.

You could add money to your account through other transaction methods that will appear on your bank statement.

The modern banking systems have been a big help to many people since they’ve helped start businesses and more.

You could get a credit card and use it to make purchases before you get your money, and you can repay it later when you are more comfortable.

Everything A Student Has To Know About Small Business Taxes

What is Trade Mispricing and Misreporting?

How To Safely Buy Cryptocurrencies